How do I wire the Trigger on the Lyric Gateway?

The Lyric Gateway has no onboard trigger output. A trigger output is a physical connection that sends voltage to a wired relay. Since the Gateway does not have a trigger the supported devices communicate wirelessly without any need for physical wiring. This ranges from sirens to keypads.

Since the Lyric Gateway does not support any wired trigger output it does limit the ability to interface third party equipment like wired sirens and relays. If you are looking to interface this type of equipment check out the Lynx Touch series panels like the L5210 or the L7000. They are very similar systems in terms of their ability to support 5800 series wireless sensors. However they have a hardwired trigger output and they support House ID technology. For some reason Honeywell dropped the House ID tech on the Lyric panels.

The trigger output is fairly self explanatory. Simply wire a connection from the output on the back of Lynx Touch panel to a wired relay such as the Altronix RBSNTTL found in the LYNX-WEXT kit. This kit includes everything you will need to power and trigger a wired siren that will scare off any intruder.

The House ID feature offers a way to address a special code where wireless devices like the Honeywell 5800RL relay can wirelessly integrate with the alarm system. The 5800RL is included in the LYNX-EXT which also has everything you need to power a wired siren. The benefit of the LYNX-EXT is that it does not require a wired connection back to the trigger output.

The Lyric Gateway is a wireless system that’s part of the Lyric Line. The Gateway is a self contained unit and has an 85 -dBm alarm sounder inside of the unit. Even though the 5800RL cannot be used, Honeywell has released the SiXSiren, bringing wireless sounding capabilites to the Gateway. This device is fully wireless, has a 300 foot operating range, runs on 4 AA batteries and also has an 85 -dBm sounder. The SiXSiren occupies one regular security zone in programming. Each security zone on the system can support (1) SiXSiren and with 64 security zones available, a user can add as many SiXSirens as needed. 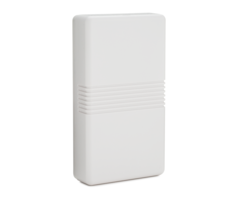