Can I Update the Firmware On a Honeywell L5200 Alarm System?

Yes, you can update the firmware on a Honeywell L5200 Alarm System. You must have a Honeywell LYNXTOUCH-MSD Firmware Updater Tool that was manufactured after October 2019 to do this. A compatible updater tool will have a sticker on the box that indicates that it will work with an L5200. 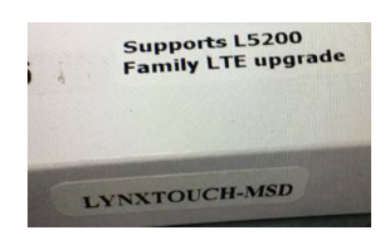 Something very interesting happens when you upgrade an L5200 System to the latest firmware version. AlarmNet will actually classify the newly-upgraded L5200 System as an L5210 System. This is because the update will result in the L5200 behaving no differently than an L5210. For AlarmNet, there is no difference between a fully updated L5200 and a fully updated 5210. As a result, it simply considers any L5200 on the latest firmware to be an L5210 System. Yes, it's true that the L5200 and L5210 have a slightly different appearance and a slightly different screen size. But as far as AlarmNet is concerned, an L5200 that has been updated using a compatible LYNXTOUCH-MSD Firmware Updater Tool is the same as an L5210.