Will The Lyric Controller Work With Wired Honeywell Sensors?

Yes, the Lyric Controller will work with wired Honeywell Sensors. But you can only do this with a wired to wireless converter. The module will take the wired devices and let them communicate with the system wirelessly. Compatible devices include the Honeywell 5800C2W and the 2GIG TAKE-345.

The Resideo Lyric Security Panel is designed to support wireless sensors. Although the system has two (2) hardwired zones for normally closed (NC) contact sensors, it will not readily support all wired sensors. This includes wired motion sensors, wired glass break sensors, and more. However, there is a way to trick the Lyric into thinking that these hardwired devices are compatible wireless devices. That is with a wired to wireless converter. Many users will use these devices when setting up a new wireless alarm system.

The Lyric readily supports the 345 MHz wireless frequency. This means that it will work with most wired to wireless converters that transmit at the 345 MHz frequency. The best wired to wireless converters to use with the Lyric are the Honeywell 5800C2W and the 2GIG TAKE-345. The 5800C2W transmits at the same 345 MHz channel as the Honeywell 5800 Sensors, meaning that any Lyric System will support this module. The 2GIG TAKE-345 transmits at the same 345 MHz channel as the 2GIG 345 MHz Sensors, so the Lyric will need to be running firmware version MR3 or higher if you want to use the TAKE-345. As a reference, the 5800C2W can support up to nine (9) zones, while the TAKE-345 can support up to eight (8) zones.

There are a few things to keep in mind when using a wired to wireless converter. The first is that any sensor used with the converter module will still need to take up one of the wireless zones on the wireless panel. Keep this in mind when you are system planning, as you do not want to run out of zones. The other thing to remember is that you cannot use life-safety devices with any of the wired to wireless converters that are compatible with the Lyric. This means that you will not be able to bring over any hardwired smoke detectors or hardwired carbon monoxide sensors and expect them to work with the system. 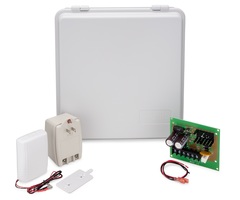