Admittedly, the DSC Iotega is the more "advanced" panel when compared with a 2GIG GC2e. The Iotega has far more wireless zones than the GC2e (128 vs. 60). And the DSC Iotega offers HomeKit functionality, while the 2GIG GC2e does not. The only other panel that offers compatibility with Apple HomeKit is the Honeywell Lyric Controller. We generally try and steer users towards the Lyric over the Iotega due to the fact that the Lyric is usually better-suited for DIY users. For more information on how the Lyric compares with the Iotega, check out this comparison FAQ.

Per Alarm.com requirements, a panel must be set up with a cellular communication path in order to connect with their servers. An optional IP communication path can also be established to provide the panel with another method for communicating with Alarm.com. Typically, a user with an Alarm.com Security System will only bother setting up an IP communication path if the panel includes a built-in WIFI card or the communicator they are using is dual-path. Otherwise, relying on exclusively cellular usually doesn't cause any issues. Cellular is more reliable than IP communication, and LTE connectivity offers speeds that are comparable to WIFI. As a result, if you get a GC2e, you will most likely rely on a cell-only setup, whereas getting an Iotega will make it easier for you to achieve an effective and reliable dual-path communication setup. Remember that you will need an alarm monitoring plan that includes cellular communication in order to monitor either of these systems. Examples of compatible monitoring plans include the Gold and Platinum Level Plans from Alarm Grid (Self or Full) and the Alarm Grid Cell-Only Plan.

But other than that, there is very little reason to select a DSC Iotega over the GC2e. Even in terms of basic day-to-day operation, the GC2e is vastly superior. The 2GIG GC2e has an integrated touchscreen controller, which makes it easier for new or unfamiliar users to understand the system and see what they are doing. This is a 5-inch capacitive touchscreen, which isn't the largest or prettiest touchscreen available, but it certainly gets the job done. The Iotega just has a light-up numeric touchpad for all system operation. If you want touchscreen operation on an Iotega, then you can add a DSC WS9TCHWNA, which is an external touchscreen keypad that connects to the Iotega via WIFI. But really, most users find it easier to just get a panel that already includes a built-in touchscreen.

In terms of sensor support, the 2GIG GC2e is much more diverse, but the Iotega supports the more powerful sensors. Starting with the 2GIG GC2e, it supports the 2GIG eSeries Encrypted Sensors, uni-directional Honeywell 5800 Sensors, and the 2GIG 345 MHz Sensors. None of these sensors offer a wireless communication range beyond 350 nominal feet. That is fine for most residential uses, but you might run into issues if you are trying to use the system in an area with many obstacles (thick walls, large metal objects, etc.) or if you need to use sensors very far away from the system. 2GIG offers a wireless repeater called the 2GIG RPTRe-345, which will repeat signals for all three (3) wireless sensor lineups that work with the 2GIG GC2e. This may help you overcome sensor communication issues for the system.

Meanwhile, there is only one wireless sensor lineup that works with the Iotega. That is the DSC PowerG Sensor lineup. The PowerG Sensors offer a communication range of up to 2 km in open air (up to 4 km with added PowerG Wireless Repeater) and 128-bit AES encryption for enhanced wireless security. These sensors also utilize advanced Frequency Hopping Spread Spectrum (FHSS) technology to thwart any RF jamming attempts. Using exclusively PowerG Sensors is usually fine, but you might be disappointed if you find that you need a very specific sensor type, only to realize that it isn't available in the PowerG lineup. While the sensors used with the 2GIG GC2e aren't as powerful, you can almost always find a sensor across the three (3) compatible sensor lineups that will work with the system and fit your needs.

In terms of home automation capabilities, the DSC Iotega and the 2GIG GC2e are roughly equal. Both systems include built-in Z-Wave Plus controllers, allowing you to pair Z-Wave devices and establish entire smart scenes through Alarm.com. But the way you enroll these sensors is much simpler and easier on a 2GIG GC2e. The GC2e Panel allows end users to enroll new Z-Wave devices themselves while on-site. But if you have a DSC Iotega, then you will need to get your alarm monitoring company to enroll these devices for you. That is a lot of work for adding a new smart light, lock, or thermostat to your system!

In fact, this issue spreads across any device used with the DSC Iotega. This represents the single largest shortcoming of the Iotega System. It offers absolutely no local end-user programming. This means that you will need to get your alarm monitoring company to perform simple and routine tasks like enrolling, editing, and deleting wireless sensors and making basic programming changes. Meanwhile, the GC2e has menus that can be easily accessed by end users to perform these tasks. While these menus might be confusing at first, they really aren't that bad once you know what your'e doing. The reality is that a GC2e will allow you to install and program your own home security system without a professional installer, while a DSC Iotega will force you to contact your monitoring company even for the simplest and most routine of tasks.

If you don't need HomeKit functionality, but you just need a more powerful panel in general, then you might take a look at the more robust 2GIG Panel, the 2GIG GC3e. The 2GIG GC3e is basically an upgraded version of the GC2e. It supports the same sensors, but it offers support for more wireless zones (100), and it includes built-in WIFI. You might also consider the Qolsys IQ Panel 2 Plus, which is actually our favorite alarm panel as of March 2020. There is even a 345 MHz version of the IQ Panel 2 Plus, which is great if you need to bring over Honeywell 5800 Sensors and/or 2GIG 345 MHz Sensors and use them with the system.

For more information on how the 2GIG GC2e and the DSC Iotega compare, check the table below: 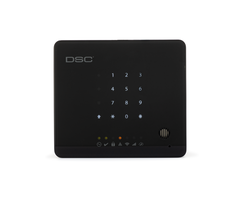