Can I Add a Smoke Detector to My 2GIG Alarm System?

Yes, you can add a smoke detector to your 2GIG Alarm System. The wireless 2GIG Panels will readily support wireless 345 MHz smoke detectors from 2GIG and Honeywell. Compatible smoke detectors can be auto-enrolled with 2GIG Security Systems and assigned to wireless zones as needed. 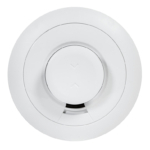 Enrolling a smoke detector with your 2GIG Alarm System offers many benefits. When the sensor activates, it will trigger an alarm on the system and cause the panel's internal siren to activate. This is great for alerting building occupants to the situation so that they vacate the premises as soon as possible. If the system is monitored by a central station, then you can have automatic emergency dispatch sent out in the event of a fire alarm. And if your monitoring service includes access to Alarm.com, then you can receive text and/or email alerts regarding an activated smoke detector.