Hi DIYers! Today, we're taking a look at the 2GIG SP1 Wireless Touchscreen Keypad for use with the 2GIG GC3 Security System. This keypad provides a secondary point of access for a GC3 Panel, and it offers virtually all of the same operation functionality and controls as the GC3 itself. 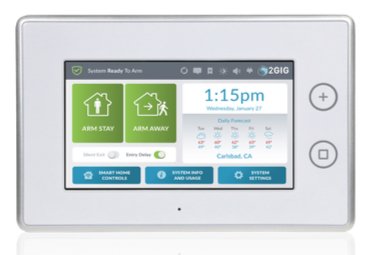 The GC3 System is already known for its bright colors and responsive touchscreen controls. This makes the system a joy to use for end users. But what if a user wants to control their system from a second location. That is where the 2GIG SP1 comes in. Previously, the only touchscreen keypad option was the 2GIG SP2. This was fine, but the SP2 didn't provide all of the features and conveniences available with the actual GC3 System. But the SP1 made it possible for users to get nearly all of the same functionality and performance out of their secondary keypad that they get out of their GC3 Alarm Panel. In fact, the only thing that the SP1 can't do is make changes to system programming.

At first glance, the SP1 and SP2 keypads might seem very similar. Both devices feature a 7-inch full-color touchscreen display, can be mounted on a wall or a desk (with 2GIG CP-DESK), WIFI connectivity, basic security controls, the ability to check current system and sensor status, bypassing capabilities, and chime functionality. This makes both devices highly capable secondary keypads. And if a user only requires basic functionality for a secondary controller, they will usually do just fine with the SP2.

But the SP1 goes above and beyond by offering features not available with the SP2. The SP1 is capable of voice annunciation for verbally announcing any zone that has been faulted. It also offers smart home automation control so that a user can control their Z-Wave devices directly from the keypad, without having to go to the GC3 System itself or pull up the Alarm.com Mobile App. This includes the ability to execute any Z-Wave Smart Scenes that have been established. The SP1 also provides the current weather data so that the user can get a quick look at the local forecast.

The SP1 and SP2 can both be purchased from the Alarm Grid website. Add a secondary keypad to your GC3 System and make your life more convenient!