Alarm Grid is Licensed to Monitor Alarms in Boca Raton, FL Under License #581

Our headquarters is in Lighthouse Point, FL, not so far from the quaint little city of Boca Raton. Alarm Grid has clients all throughout Florida, and in much of the United States. We are proud of how we treat our clients, and do whatever we can to serve them well.

Part of serving you is making sure that our municipal registrations are up to date, a daunting task, as you can imagine considering there are around 9,000 municipalities in the United States.

But that, combined with our state of the art equipment, like the Honeywell L5100, our reliable alarm monitoring service, are what ensure that you get an expeditious response from Boca's friendly police force if your property is being compromised.

Alarm Grid has received its permit to provide alarm monitoring services in Boca Raton under account #581.

Ever Wonder Why Alarm Grid Doesn't Make Its Own Security System?

I'm not into saying "never", so I won't say that Alarm Grid will never make its own security system. But we get a significant number of people asking why we don't do it now, so I've had a lot of practice answering this question. While it might be in the cards someday, let me explain our thinking on why we have made the decision to sell other company's security systems rather than make our own. Our decision is, I hope you will see, consumer-centric. We think that it is better for you, and after you read this, I am certain you'll agree.

Modern security systems have hours and hours and hours and hours of R&D. Hardware requires some incredible expertise, and the best hardware designers do not work at Alarm Grid. In fact, those engineers capable of making amazing systems are at places like General Electric and Honeywell. 2Gig is a lab full of former Honeywell-ers, and there are a few other companies that are full of pretty capable hardware creators.

Creating a security system that is better than any of these companies is going to be nearly impossible. There are options available to us. We could, for example, go to a wholesale site like alibaba.com and source foreign-made security systems, slap our sticker on them, and ship them to you. But whatever the case, there is one thing I can be sure of in a world where we go that route: our security system will be inferior to the high quality Honeywell security systems we sell now.

A lot of the systems that are "made" by other companies lack many of the basic features that Honeywell builds into their most popular system, the Honeywell LYNX such as APL (colloquially known as smash & crash), baby-sitter codes, or a graphical user interface that is simple to use and program. Honeywell and these other companies that make big systems have poured many millions of dollars into their R&D. Are their systems perfect? Not by a long shot. But they are very good.

If we ever put our name on a security system, if we are going to willingly call something a product that we created, we are only going to do it because the quality of the system is so incredibly high and the features included in the system are so surprisingly many. Until then, you can expect a store full of Honeywell security systems (and eventually other brands will make it into our catalog as well).

2) Generally companies that make their own security systems are doing it to give the impression of being the good guys... but they aren't...

There are a lot of companies out there that have decided to go the make-their-own-security-system route. They pitch them as more affordable than the alternatives, and many of them have positioned their company as the security company that is responding to the evils of deceptive contracts and pushy sales.

While these companies may provide no-contract alarm monitoring, much like we do, the fact that they have a proprietary system effectively guarantees that their customers don't leave. Unhappy with your system or service after 5 or 6 months? Too bad. If you want to secure your home with someone else's service after you've purchased their equipment, you're going to have to shell out money for an entirely new security system. So while you don't have to pay to terminate a contract early, the price of leaving their company is going to be between $200 and $500 (more if your house is very large). That's about what it would cost to terminate a contract early. So... what's the difference?

3) We View Ourselves Fundamentally as Service Providers

We know a lot about the products we sell. If you check out our reviews.

You will see that people think that we are more knowledgeable than any other company with regard to our featured product lines. What we have built this company on is the desire to make sure that our customers get the best service they can. We don't think that the gap in the industry is on the hardware side. There are a lot of really competent hardware manufacturers. But all you need to do is look at the public facing twitter feeds or read a few reviews of some of the nations biggest alarm companies to see that there is a huge gap on the service side.

We see it a lot when our technicians answer phone calls. Customers call after having left a company that tied them into a long-term contract, pushed them into getting services they didn't need, and they are suspicious of us when they call. We are able to restore their faith in humanity by being kind and answering their question with no pretense.

Focusing on doing things outside of our core competency - such as trying to build a team to put together a hardware system - would require us to sacrifice the human side of our business which is what we're more interested in the first place.

Renting an Apartment Doesn't Mean You Can't Have a Security System!

We hear from apartment renters pretty often wondering if a security system is right for them. One of our goals has been to make sure that anybody and everybody has access to state-of-the-art security, and it's no different for apartment dwellers.

We know that just because you don't own the place where you're living, it doesn't mean that you don't want to protect your property. Thieves don't care whether you own the house or rent it. That's why we've made it simple to setup your system and even simpler to pick it up and move it if you leave your home.

Setting up an apartment security system is easy. So take a look below, we'll explain exactly how we would go about it. 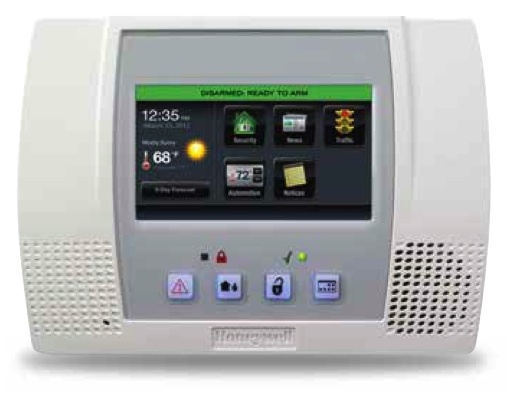 1) Pick the right system: Honeywell's L5100 panel is the best option for any renter looking for a beautiful, but affordable way to get big-home security. The Honeywell Lynx comes with an energy efficient touch screen, and a 95 db speaker built right into the unit. With the help of our Youtube videos, you can figure out how to use almost every single function of the unit with relative ease.

2) Don't wreck the walls: The L5100 is wireless, except for its need for power. While most security systems are mounted on the wall, no one says you have to be conventional. And, since the wall is owned by your landlord, we would hate to have to lose your security deposit because you punched a hole near the door for a security system. So with the help of an LT Cable and a handy dandy desk mount, you don't have to run wire behind the drywall, and the system will look great just sitting on top of your counter.

3) Wireless means no wires, and sticky tape means no holes: Since this system's wireless, you won't have to go into any attics and pull up wire. All you need to do is teach the system about all the different sensors you've installed in your apartment. You do that by typing in the serial number of your various sensors.

3) Even the communication is wireless: The L5100 can connect to the central station using either the phone line, WIFI, an ethernet cord, or over the cell network. While using the phone line or running an ethernet cord will require some wire, using wifi or cellular (GSM) means that you can have the system sit on a counter top, monitor your wireless sensors, and have nothing more than a power wire running from the system to an outlet. The WIFI communication path is the most commonly used pathway by Alarm Grid customers, but the GSM pathway is a little bit more secure (although it costs $10/month more to be monitored over cellular). All you have to do is decide how you want to be monitored. For WIFI, use the L5100-WIFI; for GSM use the GSMVLP5-4G. Installation is as easy as 1-2-3.

Below is the L5100-WIFI Installation Video

Below is the GSMVLP5-4G Installation Video

5) Home automation is for everyone: This system can be equipped with a Z-Wave module. What that means is that even renters can get creative with home automation. Whether you install Honeywell's ZWStat, or use the Leviton's z-wave plug-in outlet so that you can control the lights in your home.

Below is the L5100-ZWave Installation Video

This system will allow any apartment owner to pick up and go when they are ready to leave their home. And the sensors can go too. Whether you move into another apartment or you end up buying a home of your own, this system really is the most modern security system on the market.