One of the major advantages of the Lyric security system over other wireless security systems is that the Lyric supports a new line of bi-directional, encrypted sensors that are more secure than the existing 5800 Series sensors. The SiX Series sensors utilize 128-bit AES encryption and communicate on a 2.4GHz Wi-Fi radio frequency channel directly to the Lyric system. This advanced technology makes it much more difficult for a savvy intruder to be able to "spoof" or hack the wireless SiX Sensors in an attempt to gain access to the protected property without setting off an alarm. While the sensors use a similar frequency that WIFI routers will use, the sensors communicate right to the Lyric's built-in wireless receiver and don't use the WIFI network in the home for sensor communications. Honeywell developed the SiX Series technology themselves and even put in specialized protocols designed to scan nearby networks to prevent possible WIFI interference. Before the Lyric system and SiX Series sensors were released, there weren't really any good options for wireless security systems that utilized encrypted sensors but encrypted sensor technology is a growing trend in the industry and we encourage everyone that has a non-encrypted system to consider upgrading to add an extra layer of security to your home.

The original SiX Series door/window sensors that were available when the Lyric system first launched were the SiXCT sensors. The SiXCTs are 3.13 inches long, 1.61 inches wide and 1 inch deep (depth of the sensor out into the room compared to the mounted surface) which is fairly large when you consider that you may want to have one installed on all of your home's doors and windows. 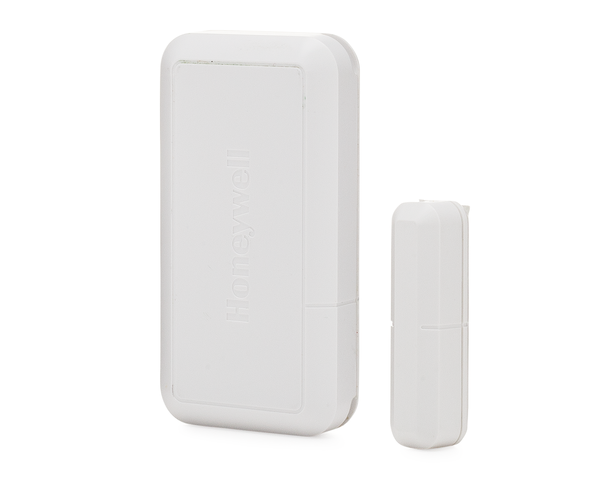 While the SiXMINICTs are much nicer looking, please keep in mind that the don't offer the same ability as the SiXCTs to wire in a wired sensor to the SiXCT so that it can act as a pass through wireless transmitter to send the alarm from the wired sensor to the wireless Lyric security system. In re-designing the smaller sensor, there wasn't enough room to add in the internal screw contacts that the SiXCT has for the option to wire in a wired device so the SiXMINICT can only be used as a regular sensor with the included magnet.

We have updated all of our Lyric wireless security system kits so that they include the newer, smaller SIXMINICTs instead of the older, bigger SiXCTs and we even put together a value 5-pack of SiXMINICT sensors that can save you on your system purchase if you need more sensors than are included in the kit you're ordering or if you need to add encrypted protection to 5 or more new doors/windows.

We believe encrypted sensor technology is only going to become more and more popular and we are excited to see that Honeywell is going to build out their line of SiX Series sensors so that hopefully there will eventually be an encrypted version of every 5800 Series device they offer now. Make sure to keep an eye on our blog as we will continue to let you all knwo about any new SiX devices that are released by Honeywell.