We have been patiently waiting for a slow news day to cover this story. After all, security systems are our top priority. But we also need to do something different every once in awhile. And so, we present to you our story of the Blazin' Wing Challenge at the nearby Buffalo Wild Wings.

This infamous event took place back in late June, before our headquarters fully reopened. While everyone at Alarm Grid was invited to take the challenge (whether they were working remotely or not), only three of us mustered up the courage to try and consume 12 ultra-spicy buffalo wings in six minutes or less. With the chicken wings doused in a sauce rated at 350,000 Scoville Units, and no napkins or drinks allowed, we knew we had our work cut out.

The three of us attempting the challenge included:

And with that, here is the shocking, uncensored footage of the events that unfolded:

BDUBS Blazin Hot Wings Challenge
As for some spoilers on how everyone fared, we'll accordingly go in order, from most triumphant to most failure.

As much as we wanted to overthrow our boss as the king of the wing, Joshua utterly destroyed the challenge with a time of 2 minutes, 10 seconds. He also earned major style points by consuming the 350,000 Scoville Unit wings without so much as breaking a sweat and truly consuming them like a refined gentleman. Truly a master of the wing-eating technique. Bravo Joshua. Bravo.

While Joshua consumed his wings like a decent human being, I, Michael, elected to take the opposite approach, instead choosing to attack the hot wings much like a ravenous animal. I earned absolutely zero style points and forever have video footage of myself eating like a buffoon. But it was all worth it, as I came out a winner, with a blazin' time of 4 minutes, 20 seconds. Coincidentally, this was twice Joshua's time. Oh well. A win is a win.

Last, and certainly least, poor James ultimately did not finish the challenge, dropping out about halfway through. Despite his mad trash-talking skills prior to the challenge, he could not back up his words, and he will forever be branded a failure at the game of eating hot wings. We are very disappointed, as we were all hoping for a clean sweep for Alarm Grid. But I guess two out of three isn't that bad.

For our efforts, Josh and I were awarded T-Shirts. Unfortunately, Josh was too busy to pose for a picture (he is an Alarm Grid co-founder after all). So you will just have to settle for a pic of me rockin' my new threads. 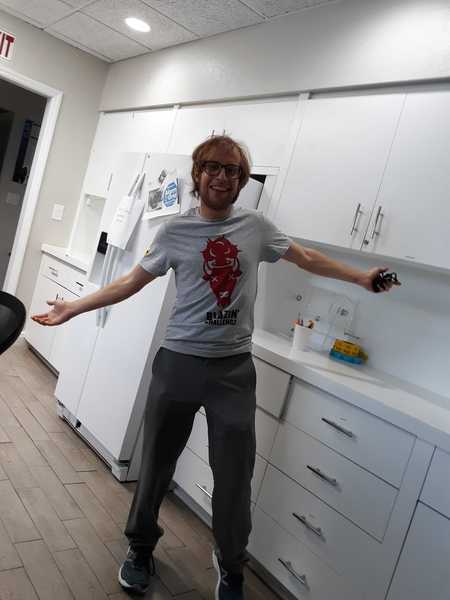 If you are interested in attempting the Blazin' Wing Challenge, contact your local Buffalo Wild Wings for more information. All in all, this was a ton of fun, and we're very grateful that we had the opportunity to come together and do something like this. The waitstaff at Buffalo Wild Wings was great, and we were very impressed with how accommodating they were.

While (some of us) enjoy eating spicy wings, we enjoy alarm monitoring even more! If you are interested in signing up for service with the best monitoring provider ever, please email support@alarmgrid.com. We check email from 9am to 8pm ET M-F. We look forward to hearing from you!