Hi DIYers! Today, we are reviewing the Encore FireFighter FF345 and the Interlogix SLX-AD-T3 takeover listening modules. These are both listening devices that are used with life-safety sensors. They allow end users to easily integrate existing life-safety sensors with their alarm systems. 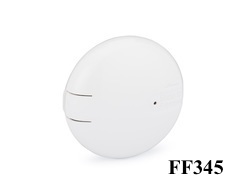 Obviously, a sensor can only work with a system if the system is able to detect signals that are sent out from the sensor. For many existing smoke detectors and carbon monoxide detectors, they may not be able to communicate successfully with a panel. This is often because they are hardwired building smoke detectors that aren't designed to integrate with a newly installed system. Or they could be standalone, battery-powered devices that do not send out wireless communication signals for communicating with a wireless receiver. In any case, these devices are unable to integrate with an alarm system through a conventional method.

However, a takeover module like the FF345 or the SLX-AD-T3 will allow these devices to be used as a part of a complete alarm system. The user will not need to change their existing smoke detectors or carbon monoxide detectors in any way. Instead, they can simply install an FF345 or an SLX-AD-T3 next to an existing life-safety sensor. They can then program the FF345 or the SLX-AD-T3 as though it were a regular life-safety sensor that is compatible with their system.

When their smoke detector or their carbon monoxide sensor is activated, it will still produce a sound to alert anyone in the building. The way that the FF345 and SLX-AD-T3 work is that they actively listen for this specific type of sound. Once the FF345 or SLX-AD-T3 hears the sound and realizes that the life-safety sensor has been activated, it will send an immediate alert to the panel. The system will then respond in the same way as if a programmed life-safety sensor were activated. If the user is monitored with a central station, this will usually mean automatic emergency dispatch.

Both the FF345 and the SLX-AD-T3 can be purchased from the Alarm Grid website. Get one to provide top-quality fire and carbon monoxide protection for your home or business.