Hi DIYers! Today, we're taking a look at the Honeywell 5800FLOOD Wireless Flood and Temperature Sensor. This device provides monitoring for water leaks and extreme temperature changes. It will work with any panel that accepts the 345 MHz frequency, including most Honeywell and 2GIG Systems.

The 5800FLOOD is a great device for anyone who needs reliable monitoring for water leaks or potential flooding. The sign of a good flood sensor is the ability to detect leaks before they cause costly damage, without setting off any false alarms. The 5800FLOOD will activate once its built-in water probes have detected at least a quarter-inch of liquid. The device will respond within 22 seconds for a quick and accurate alert about the potential for water damage.

Alarm Grid recommends using the 5800FLOOD in places that are most prone to experiencing water damage. Popular locations include bathrooms, laundry rooms, furnace rooms, basements and garages. You will want to put the 5800FLOOD in the area of the room where a water leak will most likely occur or where the water is most likely to accumulate. Once the device detects a leak, it will send an alert to security system to let it know about the situation.

The 5800FLOOD Wireless Flood and Temperature Sensor is available from Alarm Grid now. Protect your home or business from serious water damage with this versatile and effective sensor!

ciara hibbert
November 21, 2018 19:04
The 5800FLOOD is compatible with the Lyric, so you could program it to the Lyric as a zone, then set up a Scene via Z-Wave that says an alarm on that zone causes a Z-Wave water valve to close, shutting off the water.
Craig Deshler
November 21, 2018 17:43
Hi. Can this be configured through the Lyric Controller to automatically shut off the main if another Z-wave device, such as a Fortrezz Z-wave water valve is also installed? 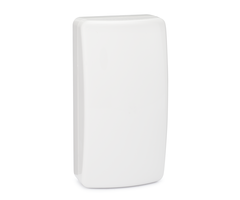