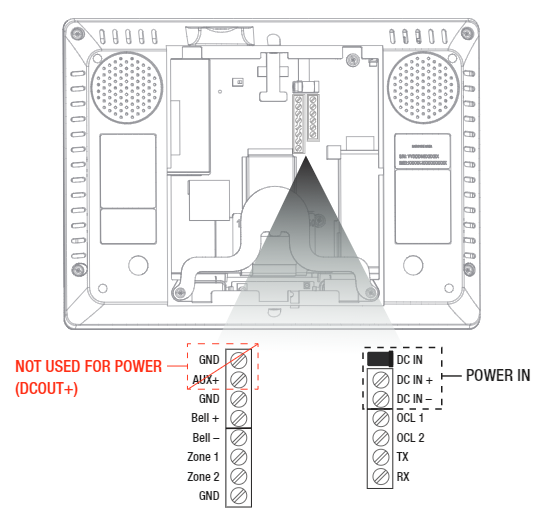 The potential problem arises in the other, larger terminal block with eight (8) terminals. This is known as the DCOUT+ Terminal Bock. And to make matters confusing the top two (2) wire terminals on this set have names that may make you think they are used for providing primary power to the system. But in reality, connecting primary system power here could seriously damage the system. These two (2) misleading wire terminals are labeled GND and AUX+, but these are output terminals.

Simply put, you do NOT want to use these terminals for providing system power. Again, the easiest way to avoid doing this is to make sure you are using the smaller terminal block with only six (6) wire terminals, NOT the larger terminal block with eight (8) wire terminals. Of course, if you use a Honeywell LT-Cable and the panel's DC IN Barrel Port, then this isn't really a potential hazard. There is only one barrel port and no way to mix it up.

The lesson of the day here is to be very careful when you are connecting power wires to the 2GIG Edge. Use the DC IN+ and DC IN- Terminals on the smaller block with six (6) terminals. The red positive (+) wire should go to DC IN+, and the black negative (-) wire should go to DC IN-. Or use a Honeywell LT-Cable and the DC IN Barrel Port. Do NOT use the GND and AUX+ Terminals on the larger block with eight (8) terminals. Making that mistake could potentially damage your 2GIG Edge System. Always be safe and smart, and make the correct wiring connections!

If you have any thoughts on the 2GIG Edge, or if you have any personal experience in wiring the system for power, then please feel free to share what you would like in a comment down below. We would love to hear from you! And remember to stay tuned to the Alarm Grid Blog for more tips and security news coming soon.

Alarm Grid has partnered with interactive service powerhouse Alarm.com. Well-known as the pioneer of modern-day interactive, the Alarm.com product, along with Total Connect and Telguard, are well-known names in the industry. "Alarm Grid is excited to offer the whole suite of Alarm.com products to our customers. The product provides an incredible consumer experience and we're excited to be offering it alongside our other interactive options," said Sterling Donnelly, president of Alarm Grid. "We have really come to love the interactive services provided by Alarm.com. Their focus is on making sure that our customers are satisfied so that we can retain them for years to come. As you can imagine, that sort of loyalty is something that a no contract alarm monitoring company like Alarm Grid is trying to find." In addition to adding the new product line, Alarm Grid is rolling out new alarm monitoring plans to accommodate the new features that Alarm.com customers have come to know and love. "We're going to start giving automation away for free, basically," said Joshua Unseth, Alarm Grid's Director of Marketing. "It's included with any of the plans we offer that are not the most basic."

In addition to the Alarm.com rollout, in an effort to expand their reach, Alarm Grid, best known for making Honeywell panels accessible to end users, is now offering 2GIG panels. Powered by the interactive services of Alarm.com, the panels can do anything and everything one would expect a professional panel to. "There is a lot of demand for 2GIG's product line," said Joshua Unseth. "We want to make sure that our consumers can get the product that they want." Donnelly reiterated the point, "we absolutely love Honeywell and are going to be supporting and selling them for as long as we're selling home security equipment, but there is a need for a consumer friendly site that sells 2GIG as well. We will do our best to service both markets."

2GIG's become a well-known security panel in the DIY space. But for many end users, the Alarm Grid touch might be just what is needed to convince them to consider the consumer panel. "2GIG's documentation is written for installers, and even then, if you're not super familiar with the equipment, there just aren't really a lot of places that a person can go to get answers. Alarm Grid is going to change that," Joshua said. "With about 90 FAQs already on-site, we expect the Alarm Grid roll out of the 2GIG product line to change the way consumers can expect to interact with these products going forward. DIY videos showing both programming and installation are coming soon, and there are no shortage of FAQs that we will be producing over the next year."

While there are other smaller outfits that sell and support both Honeywell and 2GIG panels, Alarm Grid's made a name for itself by offering unparalleled support for the panels it does sell. "We have heard reports of techs in the field using Alarm Grid's site to get answers when they get stuck," said Sterling Donnelly. "Our experience has shown us the level to which there is a knowledge gap in the field. Some techs know everything about all the panels. Some know almost nothing. As far as our techs, we simply don't want to sell something on our site that our techs don't know in and out. We want our customers to be able to ask hard questions and get great answers no matter what the customer wants to know. We spent the last couple months getting 2GIG products into the hands of our support team and making sure that they encountered as many situations as they could so that they are prepared to give technical support that exceeds everyone's expectations."
Tags: Transmitters, News, 2GIG AC1