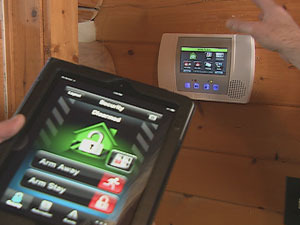 When all your system could do was be turned on and off, and you only really ever wanted to do that when you were home, it made sense that you had to be standing right in front of the panel to make it do anything. But now, as the systems can do more, there are a lot of reasons that you might want to access your panel from a place other than the house.

To access your security system while your in New York city and your house is 2,000 miles away in Salt Lake City, UT, Honeywell created the Total Connect app. And while it's revolutionary convenience is the sort of thing that many of us have always dreamed of, the app itself is a bit of rigmarole. It works by connecting to servers some place in Melville New York, talking to those servers, then the servers send a signal out to your panel, wherever it is. So while it's convenient, sending a single command can take 10-20 seconds some times. That's awesome when you're home isn't nearby and any communication is nice, but that's unacceptable when you're upstairs in your own house and you simply want to arm away for the night, or maybe you want to turn off the Z-wave lights in your room so you can go to bed and your panel is just 30 feet from you. When you flip that switch, you want it to be instantaneous... right?

Enter stage right the L5100 Connect app. This nifty little bugger controls your system using the WIFI network in your home. It only works locally (which means you can't use it when your not on the same network), but since its on the same network, it's really quick, it effectively turns your iOS device into another keypad, and it's only $9.99!

Then pair the system to the network.

How to setup WIFI on the Honeywell L5100

Then watch the following video which shows you how to pair the iOS device to the L5100 once you've got everything going.

Why am I so excited about the price? Well, if you were 'round these parts back in March of this year, you may remember Honeywell sending out its own 7-inch tablet to pasture. The tablet, known as the MID-7H, was slow and nobody liked it. While it was Android, it was basically just a glorified keypad since it came pre-installed with this app and really wasn't powerful enough to support many others. That tablet set users back about $180, and that was the only way you could control this system locally.

While we eulogized the MID-7H tablet back in March, (sort of) lamenting its passing, we mentioned that we were excited for the day that Honeywell allowed local control from tablets and phones using that app which wasn't yet released to the public. Well now, it has been. So get all the benefits of that tablet coupled with all the benefits of having an iOS device that you love. Dim the Z-Wave lights while you're watching a movie in the family room, turn up the heat during the winter using your Z-Wave thermostat, see arm your system as you are about to walk out the door, see which zones are faulting without leaving your chair.

Sit back, relax, and realize that now that you can finally control your security system without getting up out of your recliner, the future has arrived.