Qolsys is the first manufacturer to make a big splash in the new year with their IQ Hardwire 16-F w/ Large Enclosure, also known as the QS7134-840. This product includes a Qolsys IQ Hardwire 16-F Wired to Wireless Converter and a large plastic enclosure for housing up to two (2) 16-F units. 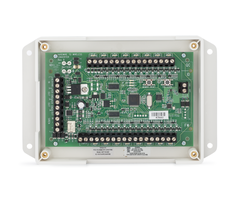 If you aren't already familiar with the Qolsys IQ Hardwire 16-F, it is a wired to wireless converter module that allows you to use hardwired sensors with a compatible 319.5 MHz wireless system. This is fantastic if you have an existing hardwired system, and you want to upgrade to a newer wireless panel. The IQ Hardwire 16-F module features 16 zone terminal pairs for adding up to 16 wireless zones to a compatible panel.

But the Qolsys IQ Hardwire 16-F does more than just provide wired sensor support. It can also function as an automatic wireless siren relay for a compatible IQ Panel 2 or IQ Panel 2 Plus System. More information on this function can be found here. The module is also noteworthy for its ability to support 2-wire smoke detectors on Zone 16. More information on using 2-wire smoke detectors with the Qolsys IQ Hardwire 16-F can be found in this FAQ.

Qolsys made one noteworthy change to the QS7134-840 when compared with the initial IQ Hardwire 16-F modules (known as QS7133-840). The new QS7134-840 can use a "Legacy Mode" to calibrate 1k to 10k resistors wired in parallel (NO) or series (NC). The original QS7133-840 could not perform this calibration, and it was restricted to only supporting 4.7k resistors. As a result, the new QS7134-840 has greater flexibility in its installation as far as choosing resistors is concerned.

You must have a resistor on each zone of the IQ Hardwire 16-F. This is true regardless of whether it is an original or an updated 16-F module, and regardless of whether or not all the zones on the module are used. All zones need a resistor. Anyone who orders the new IQ Hardwire 16-F w/ Large Enclosure will receive the new QS7134-840 module that supports calibration. That said, it is usually just easiest to use the 4.7k resistors that comes included with all versions of the IQ Hardwire 16-F. More information on installing the Hardwire 16-F can be found in this comprehensive FAQ.

Of course, the most exciting addition to the Qolsys QS7134-840 is the large plastic enclosure that can house up to two (2) Qolsys IQ Hardwire 16-F Converters and their respective backup batteries. This is perfect for making your wiring nice and organized and having everything neatly contained. We know that some DIYers out there love to make their wiring super neat and organized, and now they have their chance! We were particularly impressed with the wiring images Qolsys put out. 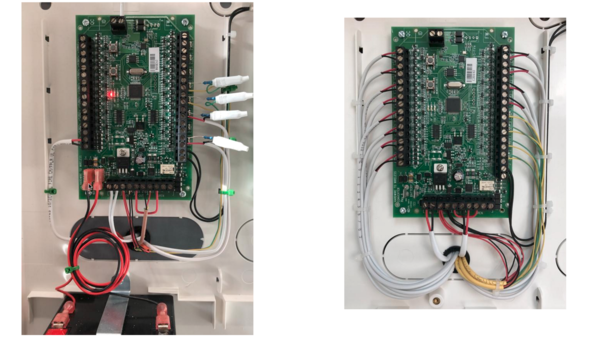 For reference, the large plastic enclosure measures 16"L x 14"W x 3"D. Even though it can house two (2) 16-F modules, only one (1) 16-F module is included with each QS7134-840 order. If you want a second module, then you should just order an additional individual module without the large plastic enclosure. You must also remember to buy one (1) backup battery for each 16-F converter module you use. Either the UltraTech 1240 or UltraTech 1270 will work for this purpose. Each module comes with a battery harness for connecting a backup battery. One final accessory that you might want to obtain is a cam lock for securing the large plastic enclosure. We are currently working with Qolsys to determine the best possible cam lock for the job. We will update once we find out.

If you have any questions about the Qolsys QS7134-840 IQ Hardwire 16-F w/ Large Plastic Enclosure or any of the other products on our website, or if you want to learn more about our monitoring services, please reach out to us! The best way to contact us is to email support@alarmgrid.com. We operate our support hours from 9am to 8pm ET M-F. We look forward to hearing from you!