The leading keypad option for the Qolsys IQ Panel 2 Plus is unquestionably the Qolsys IQ Remote. This innovative touchscreen keypad mimics the screen of an IQ2 or IQ2+, and it allows for security and automation control from a second on-site location. But sadly, it lacks a replaceable battery! 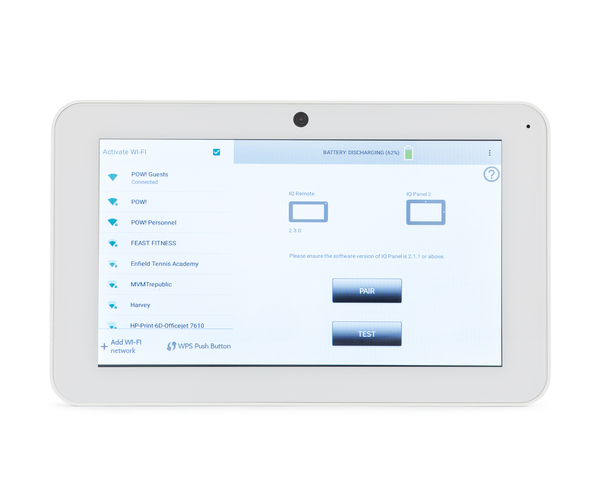 To be clear, the Qolsys IQ Remote does have a backup battery. When AC power for the IQ Remote is lost (either due to the transformer being unplugged or an electrical outage), the backup battery will keep it running for several hours. But like any rechargeable battery, the one inside the Qolsys IQ Remote has a limited useful life. And once that useful life is up, the battery cannot be replaced with a new one. This means that the IQ Remote Keypad will need to be plugged in at all times in order to be used. If AC power becomes lost for any reason once this happens, then the IQ Remote will immediately power down. Also, the keypad will then always show a low-battery warning that can never be cleared. While not completely debilitating, it is an unfortunate aspect of the Qolsys IQ Remote device.

When we spoke with Qolsys about this issue, they assured us that the IQ Remote battery is "very long lasting", and a user shouldn't encounter this issue for at least ten (10) years from the initial manufacture date, assuming that the battery is cared for properly. Additionally, the company has stated that they have not received any excessive reports of IQ Remote battery failures since its release more than five (5) years ago. But it's fair to expect that Qolsys might be hearing about this issue more frequently in about five year's time when a large number of Qolsys IQ Remote batteries begin failing! At least most IQ Remote Keypads are not carried or transported around, and most users just leave them mounted in a single location. If a user gets a backup generator for the device, then the issue might not cause serious problems.

Still, this is definitely a disappointing limitation of the Qolsys IQ Remote Keypad. We hope that Qolsys will see this message and consider updating the IQ Remote to support an end-user replaceable battery. A well-constructed device can certainly be used for more than 10 years, but it needs a replaceable battery option so that it can truly go the maximum distance. Also, for anyone considering the IQ Remote for use with an IQ Panel 2 or IQ Panel 2 Plus, we still think it's a great keypad option, and we still recommend using it. Just be aware that after ten (10) years or so, the battery will probably stop holding a charge and will begin not working as intended. The keypad will need to be plugged in and receiving power at all times once this happens, or else it will power down immediately. Our hope is that Qolsys redesigns the IQ Remote Keypad to put an end to this issue. Then a user can buy a new battery once the original reaches its end-of-life, install the new one, and keep using this great keypad!

For now, we would love to hear what you have to say about the Qolsys IQ Remote lacking a replaceable battery. Does this issue influence your decision in buying this keypad? Or do you think that it's not a major concern? Please let us know your thoughts in a comment down below. We're sure that many users who buy this keypad, and also those who have bought it in the past, may be surprised to learn that the device's backup battery cannot be replaced. And if we ever learn of Qolsys updating the IQ Remote to fix this issue, or releasing a successor keypad with a replaceable battery, then we will be sure to let you know in the Alarm Grid Blog so that you can make an informed buying decision. Please stay tuned for more security news and updates coming real soon!

And before we forget, we wish everyone in the United States a Happy Independence Day (4th of July) over this upcoming weekend! We are open today, Friday, July 2nd, and we will also be open for business as usual on Monday, July 5th. We look forward to serving you!