The Best Smart Thermostats of 2018

Ah, the thermostat. The unsung champion that keeps your home or office a bearable place to reside during the scorching summer months. You have probably relied on one of these devices for all of your life. It goes without saying that the thermostat is, and always will be, super awesome.

But what you might not know is that the latest thermostats are more feature-rich and more technologically advanced than ever before. At Alarm Grid, we don't mess with the primitive, boring thermostats of yesteryear. We have something more exciting. Ladies and gentlemen, prepare to meet the smart thermostat.

So for example, let's say you're out and about, but your plans changed, and now you're going to be home earlier than expected. You can login to your interactive services account (e.g. Total Connect 2.0 or Alarm.com) and adjust your thermostat so that your house will be comfortably cooled or heated by the time you arrive home. Or let's say you realized you're going to be home later than expected. Simply login to your interactive service account and tell your smart thermostat to hold off on heating or cooling. That way, you can conserve energy and save money on your power bill.

The other reason to get a smart thermostat is to tie it in with your smart home setup. A smart home setup that uses home automation allows users to establish a pre-determined set of actions that will be performed based on a schedule or with certain events. These sets of pre-determined response actions are referred to as smart scenes, and the actions or events that trigger them are called rules. And it isn't just thermostats that can be included in smart scenes. A smart scene can include things like lights, door locks and garage door controllers as well.

But how would you use rules and scenes with your thermostat? Well let's say you set your security system to arm away when you go to leave for the day. You can have a smart scene and a rule put in place to turn off all your Z-Wave lights and have your smart thermostat to stop cooling the house once you arm your system. That way, you are immediately saving money on your energy bills without even lifting a finger. Sure, you could manually do this with a traditional programmable thermostat, but with a smart thermostat, it is much more convenient and simple.

So now that you know why smart thermostats are great, which one should you get? Well if you want the short answer, we recommend the new T6 Z-Wave Thermostat from Honeywell. But there a couple of others that aren't far behind. Let's take a look at three outstanding smart thermostats, including the amazing T6.

There is one major reason that the Honeywell T6 is currently the best thermostat available. Unlike nearly every other thermostat, the T6 does not require common power from a C-wire. Instead, it is a rare example of a high-quality and efficient smart thermostat that can operate on battery power. This makes it arguably the easiest thermostats to install for a DIY user. Traditionally, DIYers have been apprehensive about installing a thermostat since it usually required working with power wires. But the T6 just needs to be connected with the HVAC system to get up and running.

As far as the end user experience goes, the T6 offers a nice, clean interface that is a joy to use on a daily basis. The options are easy to understand, and new users won't feel overwhelmed or confused by the simple layout. And don't let the name fool you; the Honeywell T6 isn't restricted to use with Honeywell Alarm Systems. This is a non-proprietary thermostat that can be used with any alarm system that has a Z-Wave controller. This includes systems like the 2GIG GC3 and the Qolsys IQ Panel 2. Also, it can be accessed from both the Total Connect 2.0 and the Alarm.com interactive service platforms.

Hands down, this the best smart thermostat available today. Get one.

The ADC-T2000 was designed with Alarm.com in mind. This is the interactive service platform used with that is used with many different alarm system manufacturers, including 2GIG and Qolsys. So if you have an alarm system from one of these manufacturers, it may feel comforting to know that your smart thermostat is essentially "on the same team" so to speak. It is truly designed by Alarm.com, for Alarm.com.

There are few other reasons why one might select the ADC-T2000. For one, it features push-buttons and a light-up temperature display rather than an LCD screen. Some users might prefer this. Personally, we believe the touchscreen of the T6 is the superior option, but we know that some users prefer to keep it as simple as possible. With just three main buttons (up, down and menu) it doesn't get much easier than the ADC-T2000.

With all that in mind, if you have an ADC-compatible alarm system or you want to use a secondary temperature sensor with your smart thermostat, then the ADC-T2000 might be for you. 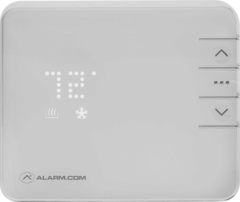 The Lyric Round is the only smart thermostat on this list that doesn't use Z-Wave. Instead, this thermostat communicates using 2.4 GHz WIFI. It is exclusively compatible with the Honeywell Lyric Controller. But remember, the Lyric Controller already includes a built-in Z-Wave controller, so it could easily use the (superior) Honeywell T6 Thermostat instead. So why choose the Lyric Round? That is a very fair question.

We see users turn to the Lyric Round for one main reason. It is for the rare instance where a user wants to use WIFI communication instead of Z-Wave. Most users who have a home automation setup will have a strong mesh network of Z-Wave devices that will help support their Z-Wave smart thermostat. And even if a user has no other Z-Wave devices, the range for Z-Wave devices is still acceptable for most homes. But at the end of the day, WIFI is a more robust signal that a standalone (key word, standalone) Z-Wave signal.

If you have a larger property and a weak or nonexistent Z-Wave mesh network, you may ultimately be better off using the Lyric Round. The smart thermostat will send reliable and consistent WIFI signals to your Honeywell Lyric Controller. Also, you will be able to access and control your Lyric Round right from Total Connect 2.0. But keep in mind, you can only use the Lyric Round if you have a Honeywell Lyric Controller Security System. 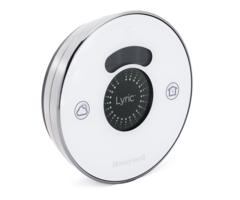 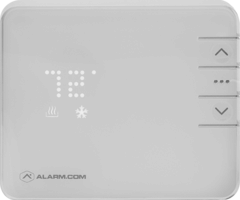 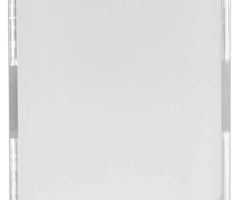