Alarm Grid announcements fresh off our journey to Vegas for ISC West 2017!

The Alarm Grid team is proud to announce some very exciting news fresh off our journey to Las Vegas at ISC West. For those already familiar with our DIY platform you will be happy to hear that our existing alarm system brands, Honeywell and 2GIG have made some giants leaps in technology. We would like to welcome those that are new to our DIY community! ISC West is a larger than life convention with incredible innovation announcements from our core alarm brands. Where to start? Let's start with our foundation, Honeywell. 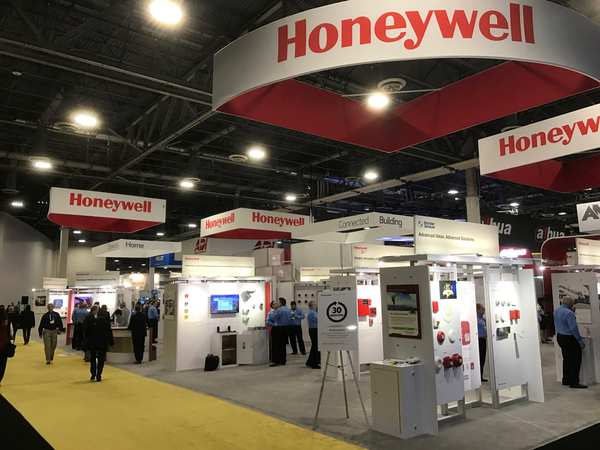 Honeywell makes excellent alarm equipment but there is steep competition now when it comes to software on Total Connect 2.0. Ahem, Alarm.com... Thankfully Honeywell came through at ISC West and showcased their new line of HD AlarmNet security cameras. Yes, HD cams that will tie in with your existing TC account. Check out our Lyric HD camera press release.

Another product that Honeywell released at ISC is the 5800COMBO. The first wireless heat, smoke and CO detector that will communicate with any 5800 series receiver. That means the Lynx Touch series, Lyric series and any VISTA series panel with a compatible 5881 RF receiver. Similar to the 5808W3 the heat detector utilizes both fixed temperature (135F degrees) and rate-of-rise heat detection (15F degrees within 1 minute) along with a photoelectric smoke detector. The integrated CO detector makes this combo unit the ideal multi-functional device. Since it does not use the SiX series RF technology it is not encrypted. Honeywell plans on releasing a SiX combo detector at some point in the future. Check out our blog post: 5800COMBO Wins SIA New Product Showcase Award 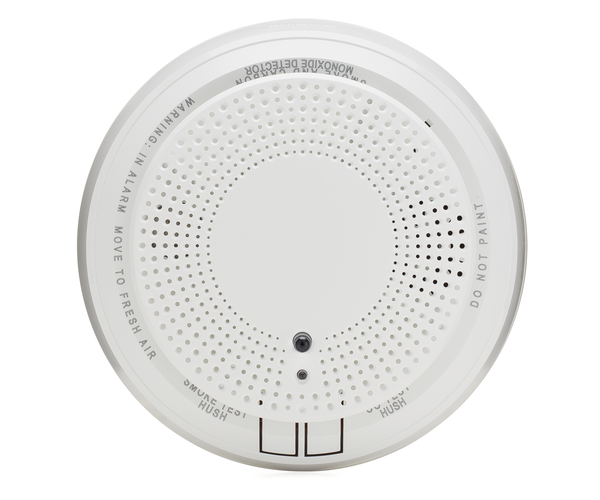 Those with a Lyric Controller should be psyched to learn that the Samsung Smartthings Z-Wave hub is now compatible as a secondary controller. There are some very unique features to the way the Lyric and Smart Things hub interact as a “primary” and “secondary” controller. The Lyric seems to be learning into SmartThings as a virtual primary of sorts. That is a word I just made up by the way. The point is that the Lyric can be learned into the hub and all devices are shifted to it. The difference is that the Lyric can still include devices after it is paired and shift these automatically to the SmartThings hub. Normally "secondary" controllers can control devices from a primary but only the primary can learn devices. The relationship between the Lyric and SmartThings breaks this general rule. If you have a Lyric and are looking for a more advanced platform to expand your automation this may be the one for you! We have a FAQ on how to pair them on our website. 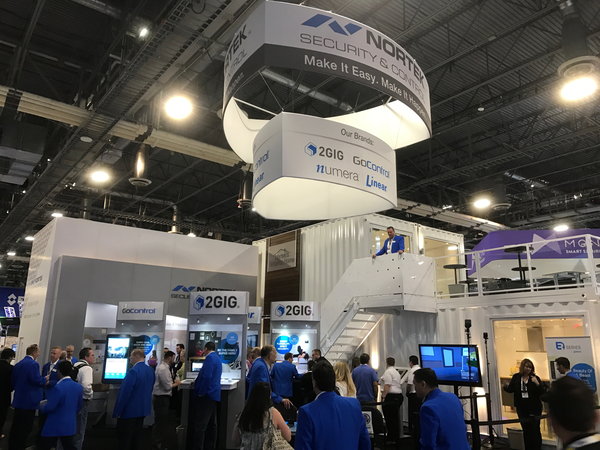 Enough about Honeywell. Nortek the parent company of 2GIG made some lofty announcements at ISC. We will briefly touch them here and get up some more details FAQs and blog posts shortly. First off, the GC3 has had more firmware updates in the past couple months than it has since the release! Exciting stuff already available and even more to come...

Firmware version 3.0.1 and 3.0.2 are officially available. V3.0.1 added support for the XCVR3-GC3 900MHz transceiver and the IMAGE2 Alarm.com image sensor. While this was exciting the 3.0.2 now supports future LTE communications, Schlage Z-Wave door locks and local WIFI technology. The LTE communicator has not been released yet. We will blog post when we have it available. Should be soon! "Local" WIFI in this case means that it will speak locally to a touchscreen keypad but not offer remote communications to a server. The touchscreen keypad is called the SP1 and it is a slim tablet design that will offer simple security control. It is slated to be released this summer. We will be getting up the V3.0.2 firmware on our website ASAP!

Rumors of a 3.1.0 firmware release are the real buzz. The DW40 push button bypass door sensor will begin logging bypass events with this update. More importantly, broadband WIFI support and a larger fully functional touchscreen keypad that supports full security features and automation control as well. This will be called the SP2 and seems to be the exact same physical design as the GC3 panel. It even has the cellular door which will never be used. They must have done this for production cost efficiency purposes. Although it could have just been a GC3 at ISC West since they did not have the plastics made yet. Who knows. The SP2 will be a sweet addition to the Go!Control family nonetheless. 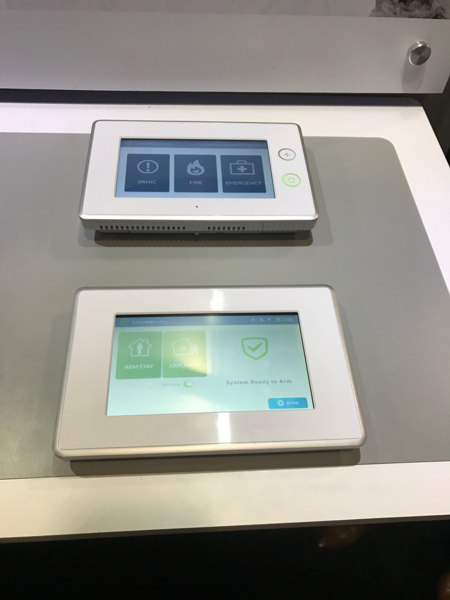 We got our eyes on two completely new alarm system platforms from 2GIG. The Rely and Vario systems will offer two new vertical business models. The Rely panel will perfectly suit customers looking for an affordable, simple cellular alarm system. It is fully wireless and supports up to 14 of the 2GIG 345MHz wireless sensors (No 5800 series Honeywell like the GC panels). The Vario is a wired, bus based alarm system that supports up to 4 partitions. Prox tag keypads looks super slick! This will be more of a commercial system but will certainly be good for pre-wired residential environments as well. 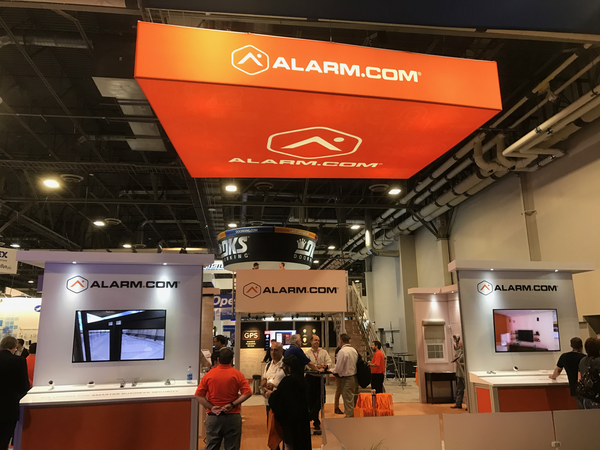 Honestly Alarm.com has released so many products and third party integrations in the past couple of years I was little disappointed by their announcements at ISC West 2017. The flip side to that coin is the approach of other dealers to announce new products that do not reach the market for another year. I may prefer Alarm.com's strategy to simply push market technologies at full speed all year long. Release products when they are ready regardless of conventions like ISC. With all that said, Alarm.com does have some fun new toys.

Alarm.com currently offers water management tools in the form of flood protection and Z-Wave water valve control. However they announced adding irrigation control now. The Rachio Smart Sprinkler Controller and the Rain Bird Irrigation Controller will be offered into the long list of third party integrators. Yes you will be able to schedule your irrigation from your security app from across the world. Alarm.com is relentlessly tackling every vertical market and inviting them into their ecosystem. The final result is an incredibly versatile offering for customers with a wide range of different protocols, technologies and brands.

Alarm.com also announced a partnership with Legrand's On-Q smart audio system. Yes they are now involving AV! Hoping for a Sonos integration in the future. My hopes were not met with any solid responses so don't get your hopes up for anything too soon. Anyways the Legrand integration offers the first audio device to be immersed into automation scenes. Set schedules or build rules to trigger the audio in your home or business. The Legrand system utilizes a network of twisted pair cable like CAT5 or CAT6 to connect the different amps and peripheral speakers. This makes it easy to install with a prewired home.

Lastly the Alarm.com team showed us the new slimline doorbell camera. Manufactured by SkyBell this product fits a specific need for those with small spaces to replace an existing doorbell. The existing SkyBell HD is already available and due to its larger size offers a1080P resolution. The new slim design bumps it down to 720P but it still looks great.