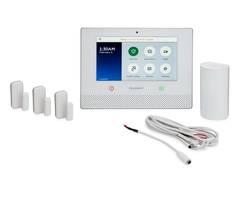 Many security systems will ask you for a code when you go to arm the system. This is so that the system can keep track of which user armed the system. Please note that some alarm systems can be set up to arm without a code. This is sometimes referred to as a "Quick Arm" setting. But in general practice, you will enter a code every time you arm at the panel.

The Installer Code is a rather unique code on a security system. This code is used primarily for entering into programming and changing system settings. However, this code can also be used to disarm the system if it was the code used to arm it. If you used a different code to arm your system, then the Installer Code cannot disarm. Therefore, as long as you do not use your Installer Code to arm, nobody will be able to use that same code to disarm.

This is important, because we always recommend keeping your Installer Code at its default setting. This is so that you do not become locked out of programming later on. If you lose or forget the default Installer Code, you can always look it up later. You won't be able to do this if you change the Installer Code from the default.

Instead of arming with your Installer Code, make sure to arm with your Master Code or a standard user code. And for the record you should absolutely change your Master Code from the default. Choose a code that is not easy to guess and only you would know. Remember, anyone who knows this code will be able to disarm your system and gain access to your home or business!

Are you not sure if you are arming and disarming with your Installer Code? Many users actually use their Installer Codes every single day, not knowing that they are putting themselves, their property, and those around them at serious risk. The easiest way to find out if the code you are using is your Installer Code is to try and enter programming.

Try the following methods on your system, and see if the code gets you into programming. If it does, then that code is your Installer Code.

If you have any questions about using your security system or if you want more helpful security tips, please email us at support@alarmgrid.com. Remember that our support hours run from 9am to 8pm ET M-F. We look forward to hearing from you!