Apple HomeKit is Getting a New Look on the iPad!

Apple HomeKit will soon be getting a new look to go along with the upcoming Apple iOS 14. This new, refreshed look brings a side-bar to the left-hand side of Apple HomeKit. The functionality should remain largely the same as the current version. But you're sure to love this sleek, new look! 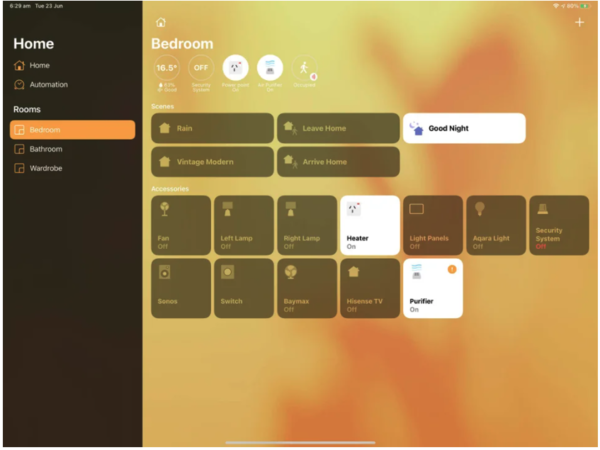 As you know, we are big fans of Apple HomeKit when paired with the Honeywell Lyric Alarm System. By pairing your Lyric System with your Apple HomeKit Network you can control the system from pretty much anywhere using Siri Voice Commands. We have a guide to setting up the Lyric with HomeKit, which you can view here. We also recommend checking out this other guide to setting up HomeKit Automations.

As you can see above, the new look for Apple HomeKit will feature a new side-bar on the left-hand side to make navigation a bit easier. This layout will better utilize the space available on the iPad. However, we still expect the general principles to using Apple HomeKit to remain the same. It's nice to see that Apple hasn't totally overhauled Apple HomeKit, but they are changing it up enough to keep things fresh. From the picture shown at the top of this post, it looks great!

This new HomeKit look won't be arriving until Apple iOS 14 is available. Unfortunately, we don't have a firm release date available quite yet. It is our understanding that it will come out sometime in September. You would need to check with Apple for more info. However, we can assure you that the Apple Home App will automatically update once iOS 14 is installed on your Apple device. Until iOS 14 is out, you'll just have to wait patiently for the time being.

Like we said, we really don't know too much about what Apple is planning for their iOS 14 release. But we can say that we are really excited about the new "change" coming to HomeKit. If you want to learn more about using the Lyric with HomeKit, or if you are interested in our monitoring services, please email us at support@alarmgrid.com. We check email from 9am to 8pm ET M-F. We look forward to hearing from you!

Note: We have learned that this new look for HomeKit for Apple iOS 14 will only be visible for the Apple iPad. The Apple iPhone version of HomeKit will not be getting the same makeover.