A Correction Regarding An Error In a Recent Blog Post

A recent blog post about the looming AT&T 3G Sunset contained an error. We mentioned in that blog that the ingenious Resideo Cellbounce, a 3G to LTE converter, does not support Total Connect 2.0. That is incorrect. As long as the original 3G device supports TC2, the Cellbounce also supports it.

This misinformation has been updated in the original post, but for those who may have already read it, we wanted to also briefly touch on it here. In brief, the Resideo Cellbounce is a plug-and-play device. It plugs into a standard 110 Volt AC outlet and should be mounted within 25' (7.6m) of the working AT&T 3G Communicator. The Cellbounce connects to the 3G communicator, and to an AT&T LTE network. Once those connections have been made, it acts as a bridge, receiving the 3G information and transmitting it through the LTE network.

AT&T has committed to supporting the Resideo Cellbounce unit until at least the end of April, 2025. It is possible that support may go beyond that date, but the contractual obligation ends on May 1. Since the Cellbounce is plug-and-play, anyone can install it. An Installation Professional is not required. Though, it is important to note that the Cellbounce should not be powered on until after the information has been added to the customer account by the alarm dealer.

The Cellbounce will arrive in a box with a Serial Number and an IMEI number printed on it. This information must be provided to the alarm dealer so that they can attach the unit to the proper customer account. This step must be performed BEFORE the Cellbounce is powered on. Once power is applied, within a few minutes the Cellbounce will connect to the existing communicator and to the LTE network. LEDs on the unit will signal when these connections take place. From there it's just a matter of testing to be sure signals are going through successfully. Just be sure to put your system on test with the monitoring station prior to beginning this process. 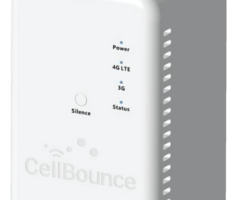