Hi DIYers! We have great news for 2GIG GC3 owners. Nortek, the owners of 2GIG, has officially announced that the 2GIG GC3 now has partitioning support available. The update comes via the Firmware Version 3.2 release. This release makes the GC3 our first wireless panel with partitioning.

If you aren't familiar with partitioning, it refers to the practice of sectioning off an alarm system into different groups that are called partitions. This allows zones within the designated partition to be armed or disarmed while the system zones outside that partition remain unaffected. For example, if a specific system partition is disarmed, then all of the zones within that partition will become disarmed. But the rest of the system will remain armed. Partitioning features are somewhat similar to bypassing zones, but it does not require each zone to be individually bypassed. 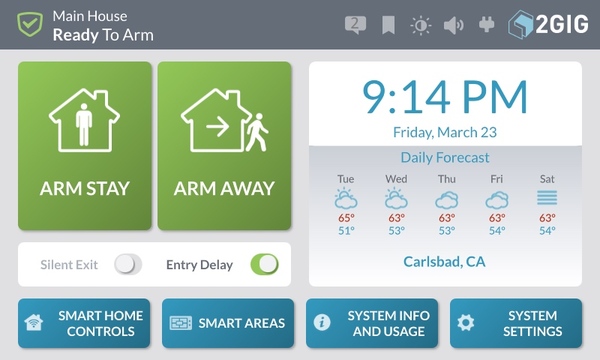 Other features for 2GIG GC3 Firmware Version 3.2.0 include the support for up to eight wireless keypads (SP1, SP2 and PAD1-345), better support for Z-Wave smart home devices, fixes with the French and Spanish language options, updates to broadband network programming (Q33, Q34 and Q35) and general networking improvements.

Additionally, Firmware Version 3.2.0 has received approval from Alarm.com, and the update can pushed down over-the-air (OTA) by an Alarm.com dealer. Please note that performing an OTA update will include added fees that may be passed on to the user. However, updating through a USB drive will not feature any added costs.

Update: This feature is also built-in standard on the newer 2GIG GC3e System.