Starting with the 2GIG STZ-1, this is a smart thermostat that uses the latest Z-Wave Plus 700-Series technology. This represents the next generation of Z-Wave Smart Home Automation after the 500-Series of Z-Wave Plus. The 2GIG STZ-1 is actually one of the very first 700-Series Z-Wave Plus devices we have ever seen. You may also see this protocol referred to as Z-Wave Plus V2. Although we haven't encountered many 700-Series Z-Wave controllers or hubs quite yet, we are sure that they will begin to pop up before too long. This new generation of Z-Wave will provide even better battery life and wireless range capabilities than ever before.

For the time being, you will have no trouble using the 2GIG STZ-1 with Z-Wave Plus controllers like the 2GIG GC3e, 2GIG GC3, 2GIG GC2e, Qolsys IQ Panel 2 Plus, and Honeywell Home Tuxedo. However, 2GIG has stated that the STZ-1 Thermostat is not compatible with their older 2GIG Go!Control GC2, which only has a classic Z-Wave controller. Therefore, you may want to refrain from getting the 2GIG STZ-1 if your automation network is still centered around a classic Z-Wave hub. But the good news is that you can take advantage of advanced features like SmartStart QR Code Pairing and the S2 Security Protocol when using it with the latest Z-Wave Plus hubs.

The 2GIG STZ-1 is also no slouch when it comes to controlling an HVAC system. The thermostat supports 3-Stage Heating and 2-Stage Cooling, humidity and fan control, and the ability to be used without a "C" wire connection and rely solely on battery power. Like any Z-Wave thermostat, you can include the 2GIG STZ-1 with smart scenes so that it automatically begins heating or cooling your home or office on a set schedule. This is great for keeping energy costs to a minimum, while also ensuring that you stay comfortable!

Whether you go with the CO8 or CO8e, you will be providing valuable carbon monoxide detection for your home or office. Carbon monoxide (CO) gas is odorless and tasteless, and it kills hundreds of people every year in the United States. Most CO-related deaths occur in the winter months when heaters are more frequently used. With the winter quickly approaching us, now is a great time to get started using carbon monoxide sensors. You will have peace of mind in knowing that you and others around you will be alerted in case a CO gas situation occurs. And with central station monitoring service, help will be automatically sent to the location in the event of a carbon monoxide alarm. Remember to check out our monitoring page if you are interested in learning more about alarm monitoring. 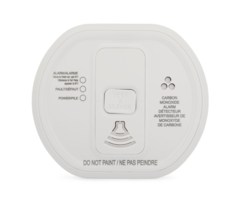