One of the big gripes people have with the LYNX panels is that the only siren that it works with is the 5800WAVE. The truth is that Honeywell's wireless security system can be made to work with any wired siren. It just takes a little bit more work. We've done our best to make it simple with FAQs, manuals, and even an Alarm Grid kit, but we have been missing the most important, helpful element: videos. The following video can be viewed as a series on YouTube (if you head over there, be sure to subscribe to the Alarm Grid channel), or you can watch it in order right below.

In this first video, we show you the Alarm Grid LYNX-EXT. It's the simplest, cheapest way to get an external sounder to work with your wireless security system without having to run a wire. The LYNX-WEXT works roughly the same way as the one in the video below, however, a wire needs to be run from the relay in the WEXT to the system itself.

Putting everything together in the LYNX-EXT is really simple. Sterling goes through the wiring, and how to connect it to the wireless security system.

Sterling goes in depth about how to choose the wired sirens you would like to use, and how to do a quick power calculation on your system. In this video, we demonstrate the strongest siren we sell, the Amseco 52s, which will make a 120dB fuss if the system is breached.

Sterling gives a quick explanation about how to properly wire the siren and the strobe. Once this is done, all that is left to do is set the house ID codes in the system and the 5800RL.

AMSECO SSX-52S: Wiring the Siren and Strobe to a Wireless Relay

Setting the House ID Codes on the LYNX Touch Units

All three of the next videos demonstrate how to set the house ID whether your system is an older, discontinued L5100, or the newer L5200 and L7000.

Setting the House ID on the 5800RL

Like most Honeywell sensors, the 5800RL uses dip switches to pick its House ID. It is the same way that the 5800WAVE works. Setting these dip switches will allow the system to communicate with the horn so that the siren can start blaring the second you need it most.

Honeywell's AD12612 is the best selling power supply in any kit. Sterling takes us through how to wire the LYNX-EXT to the power supply and external sounder.

Both to show it works, as well as allowing anyone who is curious a chance to listen to the panic sounds. Below are videos of Sterling demonstrating both the Police Panic and the Fire Panic. 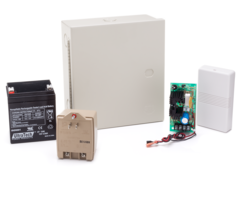