Hey there DIYers! We've got another product highlight for you. Today, we're taking a look at the L5100 ZWAVE for Honeywell Lynx Touch Systems. This add-on provides Z-Wave smart home capabilities for any L5100, L5200, L5210 or L7000, and it is great for getting the most out of a Lynx Touch. 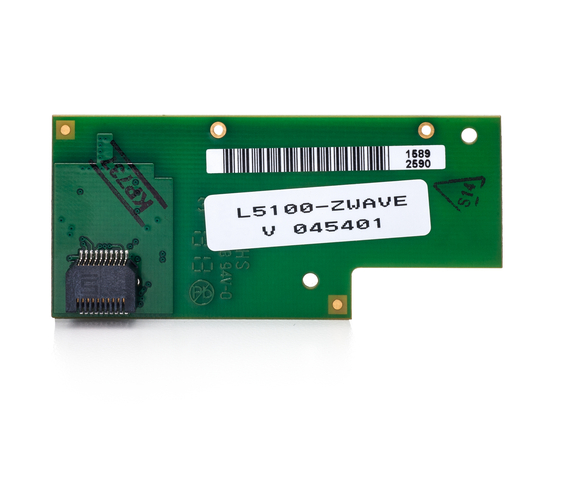 Although there are newer systems on the market, like the Honeywell Lyric Controller, 2GIG GC3 and the Qolsys IQ Panel 2, the Honeywell Lynx Touch Panels are still very capable alarm systems. They provide easy-to-use touchscreen control, and they can use a WIFI connection with an L5100 WIFI add-on. There's even an LTE cellular communicator available for the L5210 and L7000 Systems! At the end of the day, these systems can do virtually anything that a brand-new, state-of-the-art alarm system can do. They just need a little support to get there.

One great add-on for a Lynx Touch is the L5100-ZWAVE. With Z-Wave smart home automation devices being more popular than ever, an L5100-ZWAVE will add many options to a Honeywell Lynx Touch Systems. Some of the most popular Z-Wave smart home devices include Z-Wave lights, locks, thermostats, garage door controllers and more. Any of these devices can be used with the panel once the L5100-ZWAVE has been installed. So if a user wants to turn on their lights or operate their thermostat, they can do so directly from their panel.

The L5100-ZWAVE is available from Alarm Grid right now. Get one for your Lynx Touch System today!

Owner DIY: Not Just an Owner, Also a Client!

Much like those cheesy Hair Club for Men commercials of the 90s, I'm proud to say, I'm not just one of the founders of Alarm Grid, I'm also a client!

In case you're wondering, yes, I even pay the same as everyone else!  Alarm Grid's prices are already so low, I gladly pay the same monitoring prices.

So, every week I'd like to highlight a different aspect of my alarm system I love and hopefully cover some cool features you might not even know you have!

First, some background.  Like most of you, I don't come from an alarm background.  This system?  The first one I've ever installed.

My previous house already had a Brinks system installed.  So I, like many people, just paid a silly amount to activate the thing and never even realized the cool stuff that was out there.  It was literally a fixed panel with 3 sensors that I paid close to $40 a month for.  What a silly waste!

So, of course, when I moved into my current house, I called up the usual big guys.  They came out, quoted astronomical prices to cover my home's many openings (4 sliding glass doors each requiring two sensors were just the beginning!) and required long term contracts.

After paying enough early termination fees in my life, I decided to make the unfortunate choice of just putting off my alarm system.  That's never an acceptable solution.

Luckily, I soon discovered the Honeywell L5100 and Total Connect 2.0.  It was love at first site.

A panel that required NO wires (except for its power supply) and offered remote control and  Z-Wave?  As a huge gadget geek that always tried and failed to wire smart homes in the past, I knew I met the panel of my dreams.

Now finding the service?  That was obviously an even easier decision for me.  And hopefully after you meet our amazing staff and learn about our incredible service, it will be an easy choice for you.

So stick with me over the coming weeks and learn about my security system and the cool stuff I'm doing every Friday.