Qolsys IQ Panel 2 and IQ Panel 2 Plus users will be pleased to learn that a new firmware update is available! Qolsys IQ Panel 2 Firmware Version 2.6.1 can be downloaded via patch tag right now. Alarm Grid recommends that IQ2 and IQ2+ users download the update at their earliest convenience.

Important Note: For those looking for the 2.6.1 Firmware File needed to update the panel using an SD Card, we will make that file available as soon as possible. Qolsys has not yet posted it. However, when the SD Card method is used, the panel will still need a WIFI connection, and active monitoring in order to be sure the panel updates properly. For this reason, unmonitored systems should not attempt this update method unless the user is absolutely sure the "Firmware2" update is not needed on the system. For those who need the "Firmware2" update, it is recommended that the Patchtag method of updating discussed below be used.

Before we get into how to download Firmware Version 2.6.1, we would like to discuss what the new update includes. This isn't a particularly loaded update, but it still includes some new features, plus some important fixes and general system improvements. For those reasons, updating at your earliest convenience is advised.

For SD Card upgrades, there will be an auto-push of the "Firmware2" Patch from Alarm.com, assuming that the patch hasn't already been applied. This patch prevents certain IQ2 Panels from automatically rebooting at times. You can see more information about the Firmware2 fix from this prior blog post. The only other new feature release from the 2.6.1 release is that the IQ2 is now compliant with BS-8243 Standards in the United Kingdom.

All other changes for the IQ2 in 2.6.1 are general system improvements. As listed below:

To get started applying the update, make sure your IQ2 or IQ2+ is plugged in and that its battery is charged. Your system must be connected to WIFI and actively monitored so that Alarm.com can determine if the Firmware2 update is required, and then send it to the panel via WIFI if it is. Begin from the main screen of the system. Press the small grey bar at the top. Pick Settings > Advanced Settings > enter the Installer Code if prompted (default 1111) > Upgrade Software > Patch Tag > enter iqpanel2.6.1 (must be entered exactly as shown) > OK > Upgrade Using Network. The update should then go through. Once it begins, do not touch the panel screen.

Remember, it will usually take about five (5) minutes for the update to be completed. You can then check the Software Version in the About Menu under the Software tab. This is good for confirming that the 2.6.1 Firmware Update went through as intended. 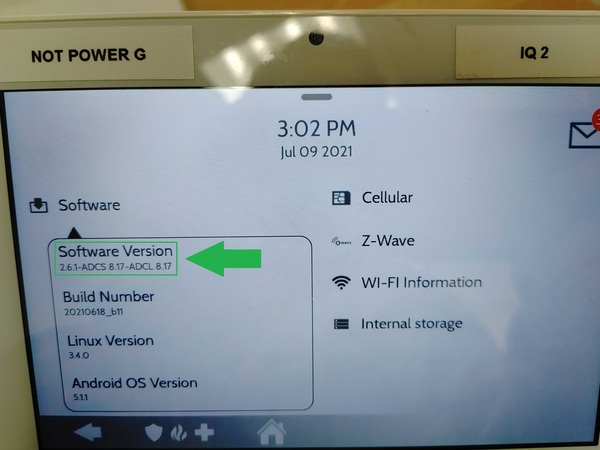 Please leave a comment down below with your thoughts on Qolsys IQ Panel 2 and IQ Panel 2 Plus Firmware Version 2.6.1. Don't hesitate to let us know about your experience with the panel or the firmware update. We want to hear your honest opinion and assist with any issues. Like always, stay tuned to the Alarm Grid Blog for more news and updates coming soon!