Reduced Prices on Some Qolsys Products!

Alarm Grid is excited to announce we are now offering certain Qolsys products at a lower price. Price reductions occur from time to time, and we're always happy to pass those savings on to our customers. The products we'll be talking about today cover a wide range of uses. Let's take a look.

The Qolsys Hardwire 16-F: This wired to wireless translator for 319.5 MHz panels sets the Gold Standard for these types of devices. With support for up to 16 wired zones, including one 2-wire smoke zone with up to ten (10) smoke detectors, 500 mA of power for devices such as motion detectors, and a 500 mA siren relay compatible with panels on RF PIC Version 11.1.4.G2 or higher. The Qolsys Hardwire 16-F is one of the most versatile expansion modules we've ever seen.

The IQ Carbon should be used in homes with a high chance of Carbon Monoxide gas build-up. CO gas is odorless and colorless, and is formed whenever carbon-based fuels are not burned efficiently. Carbon-based fuels include coal, oil, natural gas, and even wood. Homes with gas furnaces, gas appliances, fireplaces or portable gas heaters should definitely have properly placed Carbon Monoxide detectors.

Qolsys IQ Dimmer: The Qolsys IQ Dimmer is a Z-Wave plug-in on/off dim capable lamp module. It supports 120VAC/60 Hz and operates at 908.42 MHz, the Z-Wave frequency used in the United States. It can support the equivalent of 2.5A, 300W incandescent, 65W dimmable CFL/LED. If you plan to use this device for dimming, be sure that the bulb being used also supports light dimming. Although this is a standard Z-Wave device, rather than Z-Wave plus, it might be useful in a location where you need to add a device where you aren't concerned with range, and you know that the device won't need to act as a repeater. Although this device WILL repeat Z-Wave signals, it will do us using standard Z-Wave limitations.

Qolsys IQ Siren: The Qolsys IQ Siren uses standard Z-Wave technology, allowing a user to easily add a remote siren that produces up to 105dB siren sounds. This device plugs into any standard outlet. It is then paired with the alarm panel. On Qolsys panels, that's all you have to do. Once the siren is paired as a Z-Wave device, it will automatically follow the alarm sounds from the panel by default. The IQ Siren can also be used on other Z-Wave compatible panels, but may require additional programming in order to sound upon alarms on those panels.

Qolsys Image Sensor: The image sensor is a motion sensor with a still camera built-in. This affordable device just got even more affordable! For situations where you want to be able to see what's going on, but you don't want to add a full video system, the Qolsys Image Sensor is perfect. In conjunction with Alarm.com and the right monitoring plan, you can use the Image Sensor to peek-in and see what's going on at your home or business. You can set it up so that you receive an image capture upon the panel being disarmed, or when motion is detected in an area after a long period of inactivity. It's great for making sure the kids got home from school safely, or just to check in on your dog or cat who may be home alone.

While checking out Firmware Version 2.5.3 for the Qolsys IQ Panel 2 Plus, we came across the Smart Energy Optimizer feature, and we figured we'd take a closer look. From what we can tell, this feature looks to be a nice way to set up automation rules for lighting devices right from the IQ2. 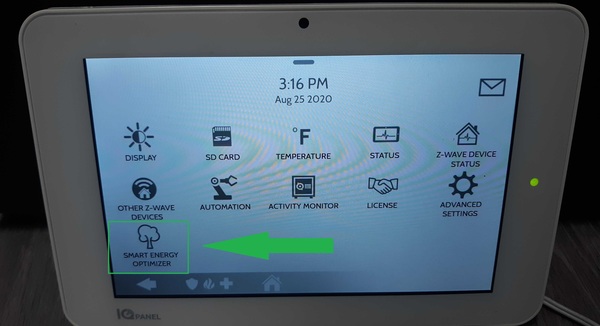 As you can see from the above picture, the option is found conveniently within the Settings Menu for the system. Simply click on the small grey bar at the top of the screen, and then choose Settings. You should see the Smart Energy Optimizer option with the Tree icon in the bottom-left corner. In order to enter this menu, you must have at least one compatible Z-Wave device enrolled with the system. If you try to enter the menu without a Z-Wave device being enrolled, then you will not gain access.

Once you are in the menu, you can set compatible lights to turn ON/OFF or to DIM to a set level during peak hours that you can set on the panel. You can set both the month and the hour of the day when "peak" consumption goes into effect for energy savings. You can also choose whether the automatic adjustments will only be applied to weekends (Saturday and Sunday). It's all customizable. We're sure Qolsys is going to continue developing this feature. 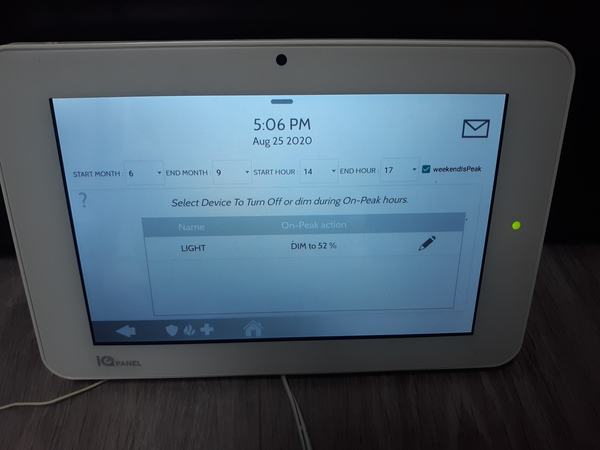 Based on the settings we have shown above, our light is set to automatically DIM to a 52% level between the months of June to September, during the hours of 2pm to 5pm, with the weekends set as the peak. Of course, you can set your compatible light or dimmer switch however you want. The time setting is expressed in 24-hour "military time", so keep that in mind when setting your values. For our testing, we used the Qolsys IQ Dimmer. The dimmer level bar is a bit flimsy and difficult to adjust, so we're hoping Qolsys makes it a bit easier to control in a future update. But for now, 52% is close enough to half-level that we're happy.

We're still exploring the feature, so we'll let you know if we find out anything else. For now though, it looks like a nifty little way that you can automate your smart lights directly from your Qolsys IQ Panel 2 Plus System! If you have any questions about the feature, or if you want to learn more about alarm monitoring, send an email to support@alarmgrid.com. We're here to check email from 9am to 8pm ET M-F. We look forward to hearing from you!