This new feature is considered a proactive method of defense because when an analytics rule is activated on a compatible camera with the Perimeter Guard™ feature enabled, it causes the camera LED to flash, and a sound to be emitted from the camera's speaker, when supported. This is done to let the potential intruder know that they've been seen and to encourage them to move along to some other location.

The Alarm.com Video Analytics feature must be enabled in order to use this feature. This allows the user to be as sure as possible that it is actually an intruder that is causing the disturbance, rather than a neighbor's pet running loose or some other source of a potential accidental activation. A compatible Alarm.com camera that has been properly calibrated for use with the analytics feature ensures that false activations are virtually eliminated. Once the camera has been calibrated simply create a Video Analytics Rule for the calibrated camera and choose to Activate Perimeter Guard.

In the "Activate Perimeter Guard" section of the recording rule, choose the option or options you want to enable. You can choose to set up a trip wire recording, or a ground zone recording. Refer to the full instructions on setting up video analytics rules that we've linked above for more information on these two (2) different options.

Basically, a trip wire recording allows you to draw a virtual line within the camera's field of view, and if anyone crosses that line while the rule is active, a clip recording is triggered, and the options selected for the Perimeter Guard feature are also triggered. When using a ground zone, the behavior is similar, but instead of an invisible trip wire, you're configuring an invisible space within the camera's viewing area. If someone enters that space and stays for a specified amount of time, a recording and the Perimeter Guard behavior are activated.

Depending on the camera you are using, you have the option to illuminate the LED, and for how long, to have the camera produce sounds, if supported, and to set a delay between alerts. The LED duration options are 3, 5, 10, or 30 seconds. The "Delay between Alerts" options are 30 seconds, 1, 2, 3, 4, 5, 10, or 15 minutes. The Audio Alert options are shown in the screenshot below. This feature can be configured using either the customer website or the Alarm.com app.

Once you've selected the options you want for the rule, be sure to Save and then be sure that the "Rule is Active" toggle is enabled at the very top of the rule creation screen. If you ever need to disable this rule, you can easily do so by toggling the rule off, rather than deleting it. Then, when you're ready to use it again, simply toggle it back on.

This is another example of how Alarm.com continues to innovate within the video surveillance space. Particularly when outdoor cameras are used, this feature can go a long way toward not just notifying of a break-in, but discouraging one. For Alarm Grid customers, you will need either our Platinum Plan (Full or Self) or a Stand-alone Video Plan.

Alarm.com video customers have another great weapon in their defensive arsenal. It's called Perimeter Guard™ and it works like this. Customers with video analytics enabled and using compatible cameras can program those cameras to flash their LEDs and make noise when an intruder is detected.

The list of cameras that can be used with this feature is slightly limited. Basically, the camera needs to have both a visible LED and a speaker (with one exception) with which to make noise and not all Alarm.com cameras have both of those things, but I imagine Alarm.com will be releasing more cameras in the future in support of this feature. Currently, the cameras that support Perimeter Guard™ are:

To set this feature up through the Alarm.com App, follow these steps:

It's that simple! Once you have this configured, using the advanced video analytics available through Alarm.com, the rule will take care of itself. The idea is that the flashing LED and the audible sounder will scare away an intruder before they ever make it to your home. It's a pound of prevention to ward off a ton of regret.

What do you think about this Alarm.com feature? Have you used it and had experience with it? Do you think it's something you'd like to give a try? Leave a comment below and let us know what you think. We love to hear from our readers.

The new ADC-V724 is the first camera from Alarm.com to offer 2-Way Audio in addition to 1080p HDR video, and IR night vision. With the integrated mic and speaker, you could easily have some fun with the neighborhood trick-or treaters while still protecting your property from vandals.

We all know that house in the neighborhood where the owners go all-out for Halloween. In some cases, it's like a haunted house attraction where, instead of having to pay to get in, you get candy if you're brave enough to get to the door. The Alarm.com ADC-V724 could help you make your house the one everybody's talking about this year!

Don't get me wrong, this camera is great all year. It just happens that it's being released at this time of year, which is fortuitous. Because, maybe you're not that house, maybe you're the other house. The one where the inhabitants turn all the lights off and pretend not to be home because they forgot to buy candy. Maybe you're in for some tricks because you don't have any treats. Well, the ADC-V724 has you covered there too. With one of these installed, you can sit inside and watch your property. If anyone shows up to play tricks, you can politely tell them through the camera that they should skip your house.

The ADC-V724 has an improved mount over previous versions of Alarm.com cameras, for better long-term stability. It also has an easier to reach MicroSD card slot, in the event you want to take advantage of the Onboard Recording feature. No MicroSD card is included with the camera. It also allows you to take advantage of the full suite of Alarm.com Video Analytics, which is a powerful tool for eliminating unwarranted video captures. The ADC-V724 offers High Dynamic Range (HDR) for better light/dark contrast in low-light environments, and can work with either 2.4 GHz or 5 GHz WIFI. With the built-in microphone, audio is included in recorded clips. When it comes to providing evidence to the police, audio is often just as important to them as video evidence, so this is a great added feature.

The speaker and MicroSD card slot can be seen in this image: 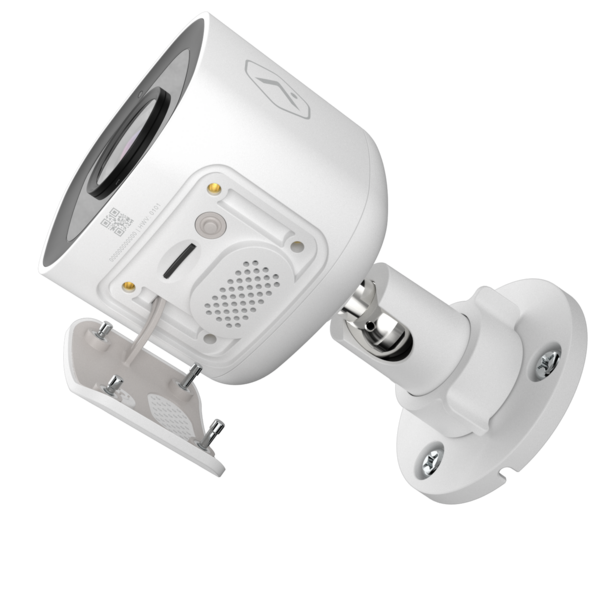 What do you think about the Alarm.com ADC-V724? Are you in the market for new indoor/outdoor cameras? Will you be going all-out for Halloween, are you the house with no candy, or somewhere in-between? Leave a comment below and let us know what you think. If there's something you'd like to see us cover in our blog, you can let us know that as well. See you next time, until then as always, stay safe!