Alarm Grid is here with a video recap as usual! We only have a few videos this time around, and all feature yours truly. But don't worry, as we have some more videos featuring Jorge and Jarrett on the way soon. But for now we hope you enjoy these videos from October 28th. Let's take a look!

I explain how there are different types of alarms on security systems. The alarm types that can occur on a security system include burglary/intrusion alarms, police panic alarms, life-safety alarms, and auxiliary alarms. The response provided by a central station operator will depend on what type of alarm occurs on the system. For example, a very different response is warranted for a life-safety alarm like a fire alarm or CO alarm, than what is needed for a burglary/intrusion alarm.

I explain the purpose and function of a backup battery on a security system. The backup battery keeps the system running when AC power is lost due to an electrical outage or the plug-in transformer being disconnected. The battery slowly stores power while the system is running on AC power. That way, it is ready to activate as soon as primary power is lost. Batteries vary in terms of how long they can keep a system running. Some batteries can maintain alarm system power on their own for at least 24 hours.

Get Your Security System Backup Batteries from Alarm Grid!

Hi DIYers! As you may know, backup batteries represent one of the most important components for any alarm system. These devices keep the panel running during a power outage so that the user stays monitored. This is crucial in case an emergency occurs while the electricity is out.

A backup battery for an alarm system works by continuously storing a charge while the system is running on plug-in transformer power. If the power goes out, then the backup battery will have power ready to keep the system running for as long as possible. Once the system loses both battery power and plug-in power, it will shut-down entirely. For that reason, batteries are just a temporary solution. But they are still extremely useful for short-term outages.

Batteries are actually very easy to work with, and they can be quickly swapped out and replaced by any DIY user. Most wireless panels use a special type of battery pack that plugs into the system board. The user can simply unplug the old battery and then plug-in the new one. Hardwired panels generally use larger batteries, that can usually be identified as a black box inside the metal enclosure. Just disconnect the wiring from the old one, and connect it to the new one. Please note that many hardwired panels can also use a shared transformer when using an alarm system communicator. More information is available here.

A big thing to understand about batteries is that they do not last forever. As a battery is used inside an alarm system, it will very slowly lose its ability to store a charge. Its maximum capacity will gradually begin to decrease until it is unsuitable for use. At that point, the user will need to get a replacement. A user will know that this is the case because a low-battery trouble condition will appear on their system.

Remember though that not all low-battery warnings are a sign of a dead battery. If this warning appears after a power outage, it could just mean that the battery needs time to restore its charge. Once the battery charge reaches a sufficient level, the condition should clear on its own. We recommend waiting at least 24 hours with the system running on continuous AC power to see if the problem goes away. If it does, then the battery still has some life remaining.

It also never hurts to be prepared and keep an additional backup battery or two in a safe area. That way, when your current battery reaches the end of its lifespan, you can quickly replace it with a new one. Since the new battery won't have a charge, it will take it awhile to regain power. But eventually, the battery should work just like a new one. Additionally, most of the batteries for hardwired panels have universal connector terminals, and you can actually keep them continuously charged with a Battery Tender device. Keeping multiple charged batteries around is great for users who live in an area where extended power outages may occur.

When looking for a new battery, you'll want to make sure it is compatible with your system. We have many of our batteries and their compatible systems listed below:

If you have any questions about batteries or if you need help choosing a battery, don't hesitate to reach out to us! You can email us at support@alarmgrid.com, or call us at (888) 818-7728 during our business hours of 9am to 8pm EST M-F. We look forward to hearing from you!

Although the LYNX Touch has a built-in 95dB siren it never hurts to beef up your audible output in the event of an alarm. Sirens are a great way to scare off intruders and inform any neighboring parties that an alarm event is in progress. Before the release of Alarm Grid's LYNX-EXT external siren kit, compiling the necessary parts for installing an external sounder was complicated and cumbersome. Now you can simply pick up this kit and be on your way to adding sirens to your wireless alarm system. When it comes time to install, check out the LYNX external sounder installation manual which has a detailed wiring diagram. You can also check out our FAQ: How do I add an external siren to my LYNX Touch wireless security system?

The Honeywell 5800RL wireless relay allows you to place the siren power assembly in the included Meir metal cabinet where it is most convenient and effective without any wiring runs back to the panel. The included Honeywell AD12612 auxiliary power supply has a max output of 1.2 amps which can power the brawny Amseco SSX-52S outdoor siren/strobe. You may want to just keep it simple by connecting a bullhorn style siren like the Honeywell 702 in your attic or outside the premises. There is also an included Honeywell 1361 AC transformer and an Ultratech 1240 battery backup unit which will carry low voltage DC to the power supply and keep it from losing power during outages.

Forget piecing together a kit of your own. Pick up an Alarm Grid LYNX-EXT external siren kit today and save your precious time and money! 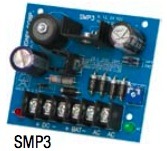